Congratulations, Amanda, on your new release, The White Rose Resists. It's a thrill to have you visit the blog again. Thank you for coming.

Last year My Dearest Dietrich released, a historical novel about the love story of Dietrich Bonhoeffer and his fiancée Maria. Your newest release is called The White Rose Resists, which is a lesser-known story about a student named Sophie Scholl. Tell us about why you had to write this story?

Research for My Dearest Dietrich led me to Sophie Scholl. I was captivated by the story of this twenty-one-year-old woman who worked alongside her brother and several fellow students at the University of Munich to write, print, and distribute thousands of leaflets across WWII Germany. I wanted to know more about her beyond the brief paragraphs I encountered in my initial research, to discover the three-dimensional woman behind the White Rose legend. The unbridled courage of the men and women who formed the White Rose held me in awe. Their lives so captivated me that I knew I had to share their story in narrative form.


These two books, My Dearest Dietrich and The White Rose Resists deal with heavy topics, important ones, but still heavy. What keeps you going forward in writing such a difficult story?

They are heavy topics, and conveying them on the page requires me to journey through the heartbreak, in a way, alongside the characters. What keeps me going is God’s incredible grace and strength, even on the hard days, and my deep belief in the power of story. Though non-fiction books and biographies are wonderful, there’s something about a novel that pulls us in at a heart level. And we need to be pulled in. We need to be moved by the horrors of the Holocaust and the devastation of war. As more and more survivors pass away each year, that time is fading from living memory, and it’s becoming easier to relegate that part of our past to a dusty and forgotten corner. As I share stories like The White Rose Resists, it’s out of a desire to honor those who are no longer here to speak to us today, but whose stories truly deserve to be told and remembered.

Talk about your research process for The White Rose Resists. Your detail is so rich and vibrant. How long does it normally take for you to research an extensive historical novel like this one?

Since I’d immersed myself in WWII Germany while writing My Dearest Dietrich, research was a matter of building on the foundation I had already laid. I began researching the White Rose long before I even decided to write the novel. Once I began the official research process, I spent months reading books and biographies written about the White Rose and delving even deeper into life in Nazi Germany. I read letters and diaries written by the students and listened to recorded interviews with family and friends of the White Rose members. I also discovered transcripts from the interrogations and notes from the White Rose trials. One of the most chilling documents I read was Sophie’s execution record. It was privilege to study the lives of these men and women—not only as heroes, but also as human beings with flaws and complexities. They inspire me! 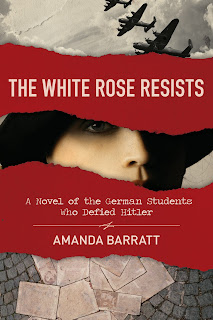 The ideal of a new Germany swept up Sophie Scholl in a maelstrom of patriotic fervor--that is, until she realized the truth behind Hitler's machinations for the fatherland. Now she and other students in Munich, the cradle of the Nazi government, have banded together to form a group to fight for the truth: the White Rose. Risking everything to print and distribute leaflets calling for Germans to rise up against the evil permeating their country, the White Rose treads a knife's edge of discovery by the Gestapo.

Annalise Brandt came to the University of Munich to study art, not get involved with conspiracy. The daughter of an SS officer, she's been brought up to believe in the Führer's divinely appointed leadership. But the more she comes to know Sophie and her friends, the more she questions the Nazi propaganda.

Soon Annalise joins their double life--students by day, resisters by night. And as the stakes increase, they're all forced to confront the deadly consequences meted out to any who dare to oppose the Reich.

A gripping testament to courage, The White Rose Resists illuminates the sacrifice and conviction of an unlikely group of revolutionaries who refused to remain silent-no matter the cost.

Amanda Barratt is the ECPA best-selling author of over a dozen novels and novellas including The White Rose Resists: A Novel of the German Students Who Defied Hitler and My Dearest Dietrich: A Novel of Dietrich Bonhoeffer's Lost Love. She is a member of American Christian Fiction Writers and a two-time FHL Reader’s Choice Award finalist. She and her family live in northern Michigan. Connect with her at www.facebook.com/amandabarrattauthor and visit her at www.amandabarratt.net.

Friends, Amanda has graciously offered copies of both The White Rose Resists AND My Dearest Dietrich to two fortunate persons! Please comment for a chance to be entered into the contest to win a copy of both fantastic novels. (Offer is only open to US continental residents, and the drawing will take place on Friday, June 5th).