Port of Origin by Lisa Harris and Lynne Gentry 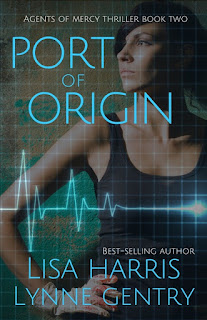 I had the privilege to read this wonderful novel a short while ago and wanted to share my review and it's back cover copy with you. Thank you, both, for allowing me to read your novel, it is deeply appreciated.


Point of Origin is an original, intense, storyline!

From the first few pages, this medical thriller with stitches of romance had me involved. It takes you on this journey to another continent while planting your feet into this palpable world that Lynne Gentry and Lisa Harris have built. By their vivid descriptions of place, it is without a doubt that one of the authors has lived in this country. As the drama intensifies, you can feel they are also well-versed in medical and military matters.

Each page brings you through a series of tight twists and turns. This is definitely going to be on my "watch list" for more to arrive by these wonderful authors. Ghost Heart is the first in the Agents of Mercy series, but this can be read as a stand-alone. Take my advice, don't miss this novel either.
Back cover copy-
When virus-infected pirates hijack a humanitarian medical ship, they trigger the threat of a global pandemic.
An African fisherman.
Foreign exploitation of Africa’s natural resources has destroyed the fishing business of Dabir Omar. Hijacking oil tankers brings cash to his family in their remote village, but it doesn’t buy the medical care needed to stop the deadly sickness attacking his people. When Dabir’s son becomes ill, the desperate pirate sets sail for the Liberty, an international humanitarian medical ship ported on the coast.
An American surgeon.
Against his better judgment, Dr. Josiah Allen agrees to work a two-week surgical stint on the Liberty, moored in Douala, Cameroon. Shortly after he arrives with his precocious six-year-old daughter, Josiah is sent ashore to investigate a mysterious illness at the ship’s post-op clinic. While he’s gone, Ebola-infected pirates hijack the medical ship where Josiah left his daughter.
The woman compelled to save them all.
When pirate negotiations fail, Mackenzie Scott’s privately-owned extraction unit comes in for the rescue. But when the medical ship where Mac had taken a wounded comrade is hijacked by pirates, the former military pararescue jumper becomes the pirate’s key hostage.
Both fathers go to war to save their children. If Mac can’t convince them to work together, the winner of this conflict will be a deadly virus intent on destroying the world.