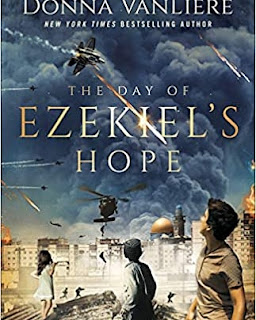 Thank you to Harvest House Publishers and author Donna VanLiere for the honor of reading and reviewing this novel.  Congratulations on your new release as well.

My review-
This genre of fiction is completely new to me. Donna VanLiere ties a fictionalized account of the end times with Biblical references and current world situations as a reference for each several chapters.

Emma Grady and Zerah Adler are two of the characters who pull you deeper into the story. I found myself concerned with them and other players in this novel as the story went along. It was gripping, emotional, tense, and realistic.

The Day of Ezekiel's Hope is an engrossing read, one which will occupy many hours of fascinating reading.

I received this book from the publisher but was under no obligation to post nor review this book.

Back Cover Copy of The Day of Ezekiel's Hope

A typical day at work turns into a nightmare for Emma Grady when her favorite patient and several colleagues vanish in front of her. Fear turns to chaos as Emma begins the frantic race from Brooklyn to Queens, anxious to discover if her boyfriend is safe. Subways are closed, graves are open, and countless people have inexplicably disappeared. Mayhem erupts as terror grips the residents of New York City.What could make so many vanish in a moment? And not just in New York, but all over the globe? Emma wonders if this is the predicted end of the world and begins a desperate search for answers.This page-turning story will take you on a riveting journey from New York City to Israel, and in the final chapters, Donna turns to the pages of the Bible, where you’ll learn that God has made known to us “the end from the beginning,” and that things aren’t spiraling downward but are actually looking up. The bestselling author of The Christmas Shoes now explores a future world facing its final days in The Time of Jacob’s Trouble, weaving end-times prophecies into the lives of Emma and her friends as they struggle to survive and come face-to-face with the chilling truth about the disappearances. 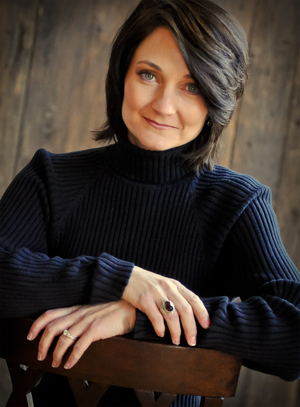 ..a mom, a wife, an animal lover, and a closet comedian at home. She's passionate about cooking (...and eating), reading, movies and teaching, inspiring, challenging and encouraging dreamers! She doesn’t like watching sports on TV but is a huge fan of athletes under five feet tall who call her Mom. Donna also loves to write books. As a New York Times and USA Today best-selling author, her 14 titles include The Christmas Shoes and The Christmas Blessing - both of which were adapted into movies starring Rob Lowe, Kimberly Williams-Paisley and Neil Patrick Harris. Both movies garnered stellar ratings for CBS, including the highest-rated made-for-TV movie of the year.  The Christmas Hope starring Madeline Stowe was adapted by Lifetime Television, and her movies The Christmas Secret and The Christmas Note when aired were among the highest rated movies in the history of the Hallmark Movies and Mystery channel. Donna's non-seasonal novel's, The Good Dream, Angels of Morgan Hill and non-fiction works like Finding Grace and High Calling - the biography of Space Shuttle Columbia Commander Rick Husband - capture the same warmth and poignancy as her Christmas books.

Donna has won a Retailer's Choice Award for Fiction, a Dove Award, a Silver Angel Award, two Audie Awards (seven nominations) for best inspirational fiction, has been a nominee for a Gold Medallion Book of the Year and is an inductee in the Ohio Foundation of Independent Colleges Hall of Excellence joining such luminaries as Coretta Scott King, Hugh Downs, Dr. Norman Vincent Peale and Senator John Glenn. She also serves on the board of directors for National House of Hope, a residency program that is offered in several states for abused and at-risk teens. (By the way, if you’re looking for a place to give or to serve, look no further than here… www.NationalHouseofHope.org)

Donna's mini-van is staring down 200,000 miles as she runs her kids to school, drama and tennis practices, Tae Kwon Do, church, and the grocery store all while promising her editor to meet her book deadlines (...which occasionally does happen). She loves to spend her summers with her family around the swimming pool or a campfire.

One of Donna’s great loves is teaching and speaking. She has appeared at countless events around the country including keynote addresses at the prestigious Patricia Adams Lecture Series at Heidelberg University, Women of Faith, Among Friends Conferences and Extraordinary Women.