Hello Barbara, Thank you for stopping by to chat with me today.

Thank you for having me your blog, Stacy.

Tell us a little about yourself and your family.

I’m a California girl who has spent the past twenty years in Wisconsin, so I’m winterized. I’ve been married over thirty years and have two sons in their twenties. One is a pastor in Michigan, and one is in law school and the Army Reserves. I never dreamed that I would be an author, especially of Christian Fiction. I became a Christian in grade school and had a lot of Bible learning to do. I love to walk, hike (On flat trails), and talk about plotting books.

What genre do you write and what inspired you to write that genre?

I am multi-published in Biblical Fiction. Now, that shouldn’t have been a surprise to me because I taught chapel in a local Christian school for six years. The first books that I wrote were sweet Historicals, but I couldn’t sell them. When I wrote a story similar to the story of Naaman in the Bible, I received my first contract. I’ve heard it said to write what you know. Well, I was teaching Bible stories and then I wrote about them and had success in the publishing world. If you write what you’re passionate about, the excitement comes through on the pages.

What is the central theme for your novel?

I chose Proverbs 18:24 as the theme verse for “Defending David.”

A man of many companions may come to ruin, but there is a friend who sticks closer than a brother.

When King David needed help and a close advisor, God sent him a Philistine exile, Ittai the Gittite. It’s ironic that God sends a foreign giant to be one of David’s closest allies. Ittai is looking for a home since he is in exile. Anywhere can seem like home if we stay connected to God. King David and Ittai both served the One True God. Their spiritual bond is a blessing to both men. Most Christians do not know about this special friendship.

If you could use three adjectives to describe your main characters, what would they be?

Loyal. Ittai is loyal to King David and the One True God. He also develops a bond with Rimona after rescuing her from trouble.

Resilient. Rimona loses her mother and is sent to live with an uncle she doesn’t know. She leaves her home for Jerusalem and then has to flee Jerusalem. Her relationship with God keeps her strong.

What advice would you give an aspiring author?

Write because you love to create stories. Pray for creativity. Ask the Holy Spirit to help you write the best stories that God wants you to write. Publishing is a subjective business, and it can be very discouraging. I received over two hundred rejections from my first four manuscripts. It would have been easy to give up on writing and move on to something new.

Are there any favorite songs you listen to while writing?

I always listen to music before I begin to write my stories, especially if I’m not excited to write. I find songs that embody the mood of my characters or the setting of the novel to inspire me.

I listened to “Famous For” by Tauren Wells when writing Ittai’s story. The song is about God’s faithfulness. Ittai seems to be trusting God more than King David after Absalom rebels. I can hear Ittai saying to King David, “Do what you are famous for.” The king who women sang about is floundering when he flees Jerusalem. God sends David a unique friend to encourage him.

What do you hope your readers glean from reading your novels?

I like to write about little-known Bible characters--people or stories in the Bible that no one knows about. I enjoy hearing readers say that they learned something new about the Bible. I encourage readers to go to the Bible and look up the Scripture that my story is based on. I’m always looking for people or stories that get passed over because we focus on the well-known Bible heroes or heroines. God is always teaching me something new. 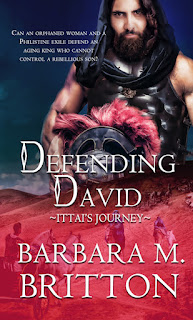 You can pre-order “Defending David” (releases 2-25-22) at Amazon, B&N, or wherever books are sold. Libraries can order it, too.

Barbara M. Britton lives in Southeast, Wisconsin and loves the snow—when it accumulates under three inches. She is published in Biblical Fiction and loves bringing little-known Bible characters to light in her stories. Her WWI Historical Until June released in 2020. Barb is a member of the American Christian Fiction Writers, the Society of Children’s Book Writers and Illustrators, and Romance Writers of America. She has a nutrition degree from Baylor University but loves to dip healthy strawberries in chocolate. Find out more about Barb and her books on her website, www.barbarambritton.com.