In Between the Pages! A Fall from Grace & Philippa Holds Court (Clavering Chronicles) by Jennie Goutet

A Fall from Grace

She needs a champion. He needs one less person to worry about.

Selena Lockhart comes with neither dowry nor connections, and she knows better than to expect Society to give her a welcome—especially after her father gambled away his fortune, precipitating the family’s sudden fall from grace and Selena’s betrothed to break off their engagement. It therefore comes as no surprise that her new neighbor, Sir Lucius, treats her with disdain. Why should he look beyond appearances when her own promises so little?

Sir Lucius Clavering is not married, but he may as well be, considering he is expected to escort his widowed mother to watering holes, round out the numbers at his married sister’s dinners, and come to the aid of his scapegrace younger siblings. It doesn’t help that single women and matchmaking mamas jostle each other to claim his face, fortune, and title so that he’s left without a moment’s peace.

When Selena shows up at Lucius’s doorstep looking for help, he is sure it’s another ploy aimed at cutting up his prized bachelor existence. Although his prejudice does not last long, Lucius fears his first reaction might have ruined his chances with her. How can he save her from Society’s teeth when she continues to hold him at arm’s length?

She’s capable of many things—including driving him mad.

At the start of their London Season, Philippa Clavering discovers her friend Susan is being pursued by the wrong gentleman and decides to turn Susan’s head to a worthier suitor. Not one to shrink from what she views as her duty and gift, Philippa sets plans in motion to bring about the happy ending her friend deserves. What she does not expect is to have Susan’s older brother watching—and criticizing—her every move.

After a respectable number of years on the town, Jack Blythefield is at last contemplating the idea of settling down. What he seeks is a compliant wife to provide him an heir or two and make his home comfortable while he spends his evenings at the club, where a man can get some peace. What he does not need is a termagant who sets his life on end with madcap schemes which invariably involve his unwilling assistance.

However, when the reputation of Jack’s family is threatened, Philippa is the one he turns to. And as her most determined suitor grows assured of his conquest, Jack must decide if a comfortable and docile wife is truly what he seeks or if he should throw down the gauntlet of his heart before Philippa closes court.

Philippa Holds Court is the second in the Clavering Chronicles series, after A Fall from Grace, and it is a clean & wholesome Regency romance, written in the traditional style. ♥ 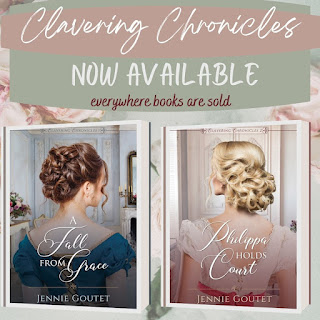 A Fall from Grace: https://books2read.com/u/brwZP7 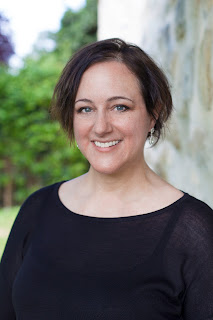 Jennie Goutet is an American-born Anglophile, who lives with her French husband and their three children in a small town outside Paris. Her imagination resides in Regency England, where her Clavering Chronicles and Memorable Proposals series are set. Jennie is author of the award-winning memoir, Stars Upside Down, and the modern romances, A Sweetheart in Paris and A Noble Affair. A Christian, a cook, and an inveterate klutz, Jennie writes about faith, food, and life—even the clumsy moments—on her blog, A Lady in France.