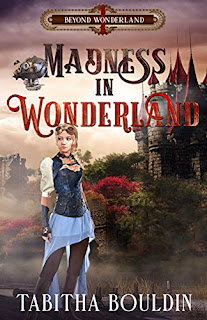 Hello, friends! I am thrilled to have my friend and author, Tabitha Bouldin here with me today to speak about her March 8th release, Madness in Wonderland.

Come join us for the fun!

Congratulations, Tabitha, on your newest novel, Madness in Wonderland, which releases on March 8, 2022. Can you tell us about your novel, and what drew you to this story?

Madness in Wonderland was a challenge. Literally. I saw a contest posted that asked for writers to put together two stories from public domain and give them a Christian fiction twist. I’d been wanting to write Christian fantasy for a long time, so I leaped at the opportunity. I went through several ideas before I landed on a mash-up of Alice in Wonderland and Frankenstein.  All I had to do then was figure out how they worked together. I’ve been a fan of Alice in Wonderland retellings for years, and was excited to put my own spin on the story. I decided to go all out, as far from my comfort zone as I could think. So I chose to focus on Frankenstein’s monster as one of the heroes, alongside Hatter and Alice. Once I started putting them down on paper, they took off with the story. I don’t know any story I’ve written that came to me as fast as Madness did. It was a pleasure to write, and I love these characters.

Who are your main characters in your novel? Do you identify with either of them?

I have three main characters in Madness in Wonderland. Alice, Hatter, and Alpha. I can’t say that I personally connect with any of them. They’re all much braver than me. Alice and Hatter are pirates who left their homes in their teens and are now living in a Wonderland where a tyrant sits on the throne. They’ve worked behind the scenes to tear down the crown, but to no avail. When Alpha shows up, they think he's a monster. Alpha thinks of himself as a monster. He’d love to have redemption but thinks he’s beyond hope. I connect most with Alpha. The feeling of never measuring up to what he thinks God wants him to be, or to be worthy of the gift of forgiveness, I’ve felt that.

What is the central faith message in your novel?

The message that I did my best to convey is that no place is too far for God. He can find us in the darkest holes, in the deepest sin, and love us unconditionally.

When did you begin writing? Did you have another career before becoming an author?

I began writing in 2015 while working as a Medical Assistant. I’d been working in a doctor’s office for ten years by then, and though becoming an author wasn’t something I sought out, the idea of writing down the stories in my head refused to let me sleep at night. I thought I’d jot down the first story and the urge would pass. After all, I’m the queen of picking up and discarding habits. What happened instead was that I ended up leaving my job to be a stay-at-home-mom, then I went to college for a bachelor's degree in creative writing, then I started querying. Seven years later, I’m still going, and this “habit” shows no sign of letting go.

Do any of the movies you watch or books that you read influence your story ideas? And what are some of the books you’re currently reading? Favorite authors?

I tend to read in the genre I’m writing. I’ve enjoyed several fairy tale retellings over the last few months as I finish up the sequel and begin thinking about book three. Dust and Shadow by Kara Swanson have been excellent inspiration, as she writes beautifully complex characters. I have many, many favorites. Pretty much anything from Enclave Publishing has either been read or is on my TBR. I don’t watch many movies, but if I had to say one that had been an inspiration, it would be Mortal Engines, which, incidentally, is based off a book series (that I haven’t read yet!).

What advice would you give to aspiring authors?

Keep going. There are going to be moments when you’re going to want to quit. Don’t. Reach out to other authors. Writing is a lonely job, but that doesn’t mean you have to be alone all the time. Find your writing people. They’re out there. You might not find a perfect fit right away, don’t give up on that either. Writing takes a mixture of patience, luck, and perseverance. Word after word, day after day. And the end result, that book when it’s finally in your hands, that makes it all worth it.

Do you have any pets?

Um, yes. You could say too many, though I’ll never admit to that. We have three cats in the house, and one that lives outside. Plus we had 3 kittens show up over Christmas and though we tried to give them away, they’re still here. I also have a horse. So, yeah. Animals everywhere.

What is on the horizon for you, writing wise?

Right now, I’m plotting book three in the Beyond Wonderland series. After that, I have an entirely new series that I want to write based on Jack and the Beanstalk. I have several contemporary Christian romance books releasing this year (YAY!), and I’m working on another series there as well. If you see me in public and I don’t know who you are when I should, this is why. My brain is full of book characters, ha! 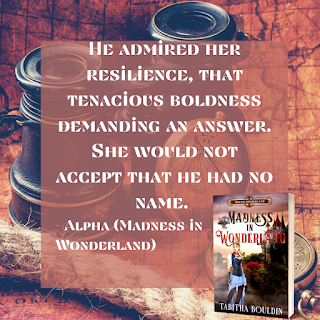 Wonderland is in trouble.

Under the rule of the Red Queen, Wonderland is under constant threat. In fear for her throne, children are taken into the queen’s army and only the strongest survive.
Alice is nothing but a pirate, but with the help of Hatter, they hatch a plan to sneak into the Red Queen’s palace to free Hatter’s sister. After all, Alice has always wanted to fly an airship.
Dr. Frank N. Stein has created an army of automatons to serve their queen. Of particular note: a prototype soldier. Part man. Part machine. The best of both worlds.
Doc’s monster is a threat to everything they know, but Alice sees something in the man that begs she look beyond what he’s done and search out the heart of the beast for the better of the realm.

He’s their only hope of survival, but how can a monster learn to love when all he’s known is hate? 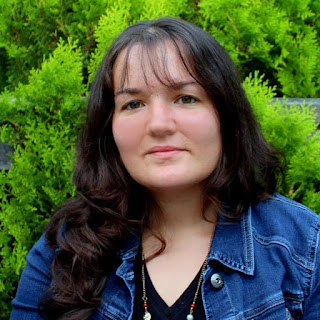 Tabitha Bouldin has a bachelor's degree in creative writing/English from Southern New Hampshire University. She is a member of American Christian Fiction Writers (ACFW), InspyRomance, Blue Ridge Reader Connections (BRRC), and Realm Makers. She has been writing since 2015. When she's not homeschooling her kids, you'll find her curled up with a book. Tabitha's genre of choice is Contemporary Christian Romance which she describes as: Adventure with heart.

Where to connect with Tabitha: